September is a beautiful and bountiful time in the Washington region. The weather is warm and sunny with just a hint of that crisp Autumn air, and the markets are still overflowing with Summer’s bounty. With the Georgetown University Farmer’s Market returning to campus on September 4th, we figure September is also the perfect time to welcome our new contributing author, Georgetown University Professor of Pharmacology and Physiology, Thomas Sherman. Professor Sherman’s posts will explore topics like  food as medicine, nutrition, metabolism, exercise and appetite throughout the year.

We always appear to be in a deficiency epidemic for some fashionable vitamin, mineral or nutrient. This epidemic is always critical, always involves a staggering fraction of the population, and thankfully, can always be addressed by a new miracle supplement or superfood just introduced to market. Calcium, vitamin D, omega-3 fatty acids, and antioxidant deficiencies are our most recent obsessions, but in conversations with my students and colleagues, it appears that each is aware of some deficiency state, such as magnesium or folate or iron or chromium, either in themselves or in the population that needs to be addressed. We worry that vegans are not getting enough vitamin B12, we feel guilty if we use non-iodized salt, and we purchase the box that states, “each serving provides 100% of your daily intake of” something.

We are living in an age of functional foods, and we derive tremendous personal satisfaction when meeting the esoteric, ever-changing, curiously fashionable, nutrient demands of our body. I am as guilty of this as anyone, and throughout our recent sequence of lectures on vitamins and minerals, I frequently found myself citing statistics on different deficiency states – sometimes in the general population, but more frequently for some at-risk group, such as the elderly or the socio-economically disadvantaged. It was with great interest, therefore, that I finally got sufficiently deep into my stack of readings to find the Second National Report on Biochemical Indicators of Diet and Nutrition in the U.S. Population 2012. This detailed report is part of a series providing an ongoing assessment of the U.S. population’s nutrition status by measuring blood and urine levels of diet-and-nutrition related biochemical indicators. The specimens were collected by the CDC National Health and Nutrition Examination Survey (NHANES), and included laboratory analyses for 58 biochemical indicators. Thus, this report should provide a detailed listing of everything for which we are deficient. Although the prevalence of specific deficiencies varied by age, gender, or race/ethnicity, only 10% or less of the general U.S. population had nutrition deficiencies for selected indicators:

I will highlight some areas of interest and concern, and offer some analysis, advice and a few recommendations, following these excerpts from the report, but overall, the data does not support the notion that there is an epidemic of severe nutrient and vitamin deficiency. This is a cautionary tale, however, so pay attention. As for the highlights … 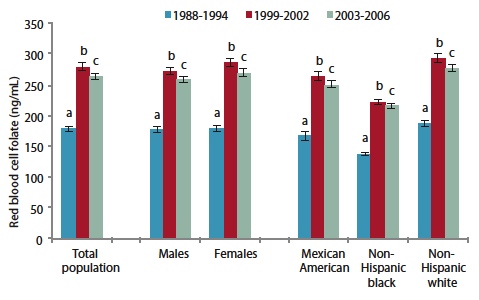 Vitamin D is naturally found in only a few foods, such as fish-liver oils, fatty fishes, mushrooms, egg yolks, and liver. In the United States, vitamin D is commonly added to milk and other foods. Ultraviolet light from the sun catalyzes the photosynthesis of vitamin D in the skin, which is then transported to the liver and converted to 25-hydroxyvitamin D. Clinicians use serum 25-hydroxyvitamin D to determine a person’s vitamin D status because it is a good reflection of cumulative effects of exposure to sunlight and dietary intake. Vitamin D is essential for good bone health. Additional benefits, such as muscle strength and protecting against cancer and type 2 diabetes are under active investigation. Vitamin D levels of 50 nmol/L or greater are considered optimal. 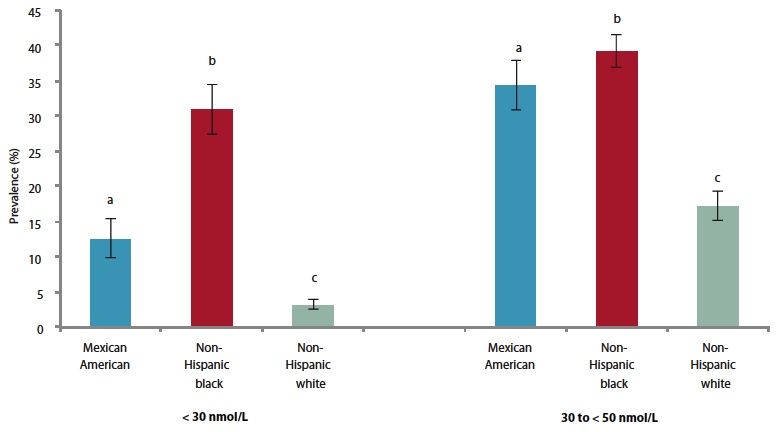 Iron is needed for the formation of hemoglobin, the protein in red blood cells that carries oxygen to tissues. Iron deficiency is linked to adverse consequences, such as reduced physical capacity, poor pregnancy outcomes, and negative effects on cognitive development among infants and adolescents and can progress to anemia if not treated. Low serum ferritin is a sensitive indicator of iron deficiency, but ferritin is affected by inflammation and levels do not track well with the progression of iron deficiency to anemia once iron stores are depleted. Serum soluble transferrin receptor (sTfR) levels start to increase after iron stores are depleted; they are indicative of functional iron deficiency and less affected by inflammation. Measuring this new marker and calculating the ratio of sTfR to ferritin, so-called body iron, allows assessment of the full spectrum of iron deficiency in the presence of inflammation. 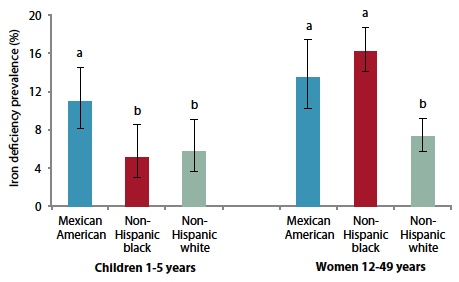 Iodine is an essential component of the thyroid hormones involved in regulating the body’s metabolic processes related to normal growth and development. Across the world, iodized salt and seafood are the major dietary sources of iodine. In the United States, where addition of iodine to salt is not mandatory, most people get their iodine from dairy products and bread. Iodine deficiency is the most preventable cause of mental retardation in the world. Iodine deficiency disorders include mental retardation, hypothyroidism, goiter, cretinism, and varying degrees of other growth and developmental abnormalities. Most dietary iodine absorbed in the body eventually appears in the urine; thus, urine iodine excretion is recommended for assessing recent dietary iodine intake.

Ours is a big country with a wide assortment of people with varied dietary habits, but in general, when examining individual nutrient levels, as was done in this survey, the country’s overall nutrition status appears very healthy. Folate supplementation has to be considered a major success story. Vitamin D remains an area of concern, but the relationship between vitamin D levels and health is more complicated than previously thought given the disconnect between levels and fracture rates in blacks, so this needs further investigation. Certainly, overall DHA levels are not the disaster everyone expected, although a recommended level of DHA is elusive. Iron and iodine also remain areas of concern in selected segments of our society, but are well above the deficiencies observed internationally. 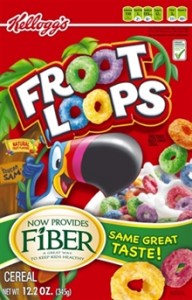 Nutrients vs Nutrition: How do you explain the disparity between the public health anguish over our poor dietary habits and the surprisingly good indices of nutrient levels? This is where caution is cautioned. As I mentioned in the introduction, we are living in a era of functional foods, and between public health measures to supplement food staples with vitamins – such as flour with folic acid and dairy with vitamin D – and the marketing success of nutrient enrichment in many foods, we have created the illusion of nutrition. Consider, for example: what if everyone obtained these nutrient levels by eating Fruit Loops every morning, a cereal famously enriched with most vitamins and minerals, is now advertised as multigrain and a good source of fiber, and yet is 41% sugar and is one of the most heavily marketed prepared cereals to children? Our increasing dependence on processed foods, prepared foods, and fast foods, all of which are positioned to be supplemented by nutrients, has us believing that these are healthy foods. We focus on the nutrients and ignore the food itself. This is the very definition of nutritionism (see previous post), for it assumes we understand what is important about the food we eat, and that it can simply be added back to the foods we process.

Vitaminsurance: Multivitamins are certainly part of this cautionary tale, but a more subtle and complicated one. The scientific leg on which multivitamin use stands is weak, but not without signs of some support. It is interesting that many public health officials and epidemiologists continue to describe multivitamin use as a form of nutritional insurance; it does not make up for a poor diet, but it may insure against inadvertent nutrient deficiencies due to seasonal or other variations in diet or risks poised by individual metabolic differences. Hence the term vitaminsurance recently coined by Gyorgy Scrinis, an Australian food writer also credited with the termnutritionism and the author of a new book on this topic.

If I had to offer advice on vitamin use, it would be distilled to this:

This article was originally published on the Georgetown Food Studies Blog. Republished here with permission of the author.